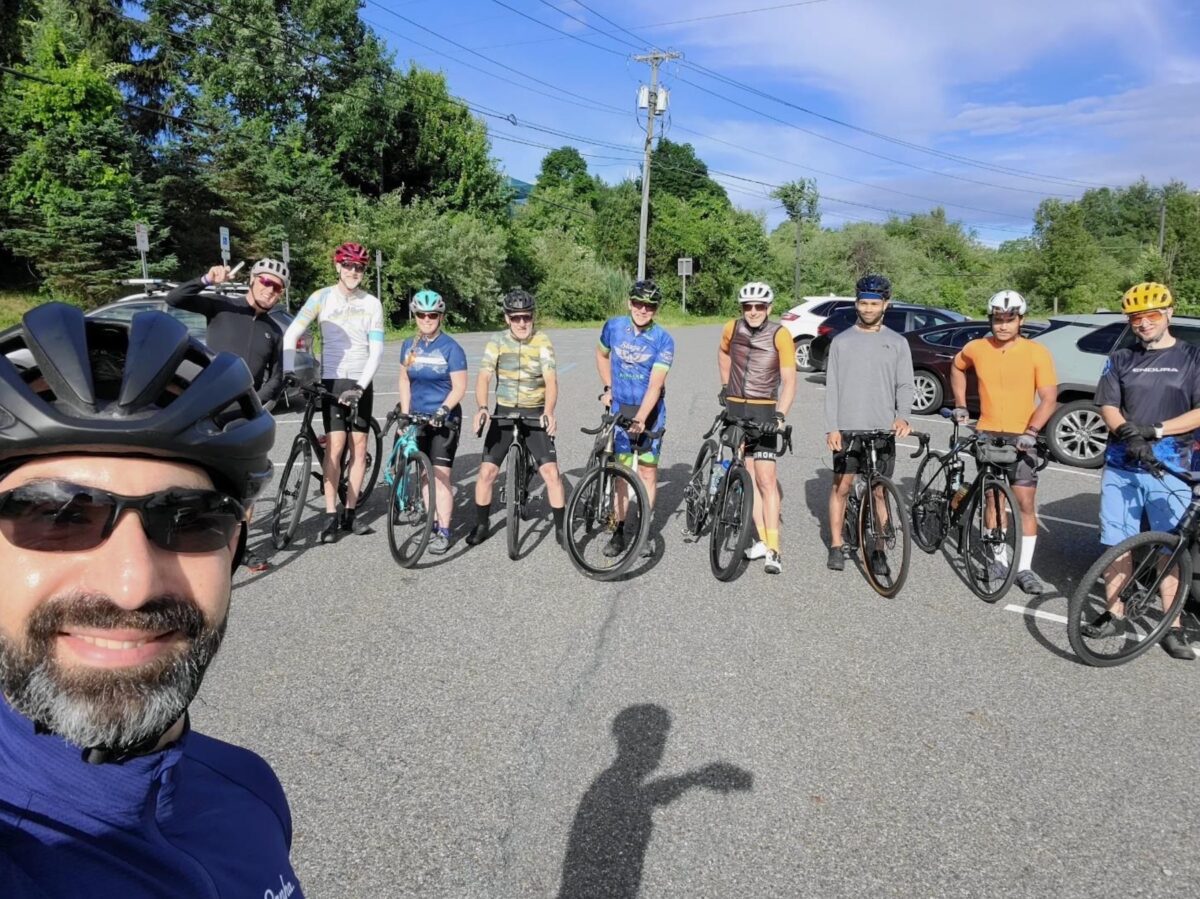 On June 18, 2022, GrNY riders started near Brewster, NY and headed northward across Putnam and then into Dutchess County, NY. It was absolutely perfect weather for riding! The high temperature was around 68 degrees with just enough cloud cover to make for dramatic photos, but there was no rain. A medium-speed group, led by Kathy, tackled 50 miles with 4800 ft of climbing. A faster group, led by Steve, rode 66 miles with 6000 ft of climbing.

Overall, this was a beautiful mixed-surface ride with stretches of dirt road, rural paved roads, and some very short sections of rougher forest trail. There were great views throughout the ride. Both routes are highly recommended. Tires of 35mm width are plenty for most of the ride, but some folks probably appreciated wider tires for the short trail sections. Be forewarned that both routes had considerable climbing. For the medium group, the hardest climbs came in the first half (ideal). For the faster group, the climbs were more well-distributed, with one of the tougher climbs appearing 51 miles into the ride. That said, both groups had to climb back up Bullet Hole Rd near the end of the ride, which probably seemed like a bigger climb than it really was, given everyone’s tired legs.

The goal for both groups was to end at the same time, despite the different distances traveled. This almost worked, but not exactly! The *moving time* of both group leaders was within about 15 minutes of each other, which was well-planned. However, we “laggards” in the faster group took our lunch break during the ride, while the medium speed group only stopped briefly and ate more substantially at the end of the ride. Now I know why Kathy’s group got back so much quicker! The medium-speed group was happily enjoying cold drinks when we joined them at the post-ride meeting spot. We had some well-earned cold beers ourselves when we got there.

Things went well on both rides, with one minor exception. For the faster/longer distance group, I originally planned for us to filter water around mile 19 (to top off our water bottles), but with 25 riders signed-up by mid-week, that seemed like it might be too inefficient. Instead, I added some extra distance for a stop at the General Store near Bulls Bridge in South Kent, CT. Unfortunately, it was closed! We searched around and eventually made use of a convenient water tap at a nearby inn (they were nice about it). Note for future riders of the longer route: Bring plenty of food and water!

Faster Speed (65 miles, >5000′):
https://ridewithgps.com/routes/39539451
Bring plenty of water and food! The first reliable stop is around mile 47 (gas stations with Cumberland Farms / Dunkin) or mile 50 (good pizza by the slice + deli). Alternatively, future riders could detour to Wingdale around mile 24, which adds a few extra miles, but has more reliable

NOTE FOR THE FUTURE: Almost immediately across the street from the Park & Ride (i.e. starting location) is Pugsley Rd, which is currently rural and dirt. HOWEVER, all of the trees have been cleared for the first 1/2 mile and the entire area is slated for a huge warehouse and distribution center. It sounds like Pugsley Rd will soon be a busy, paved trucking road and the current intersection will be widened to 4 lanes with turn signals. There will also be a huge sports complex on some of the land they are clearing. Hundreds of trucks per day will flow through that area (distribution center) plus hundreds of cars on weekends (sports complex). I’ll miss this peaceful rural road that somehow began right from the heart of concrete and sprawl. Enjoy it while it lasts! 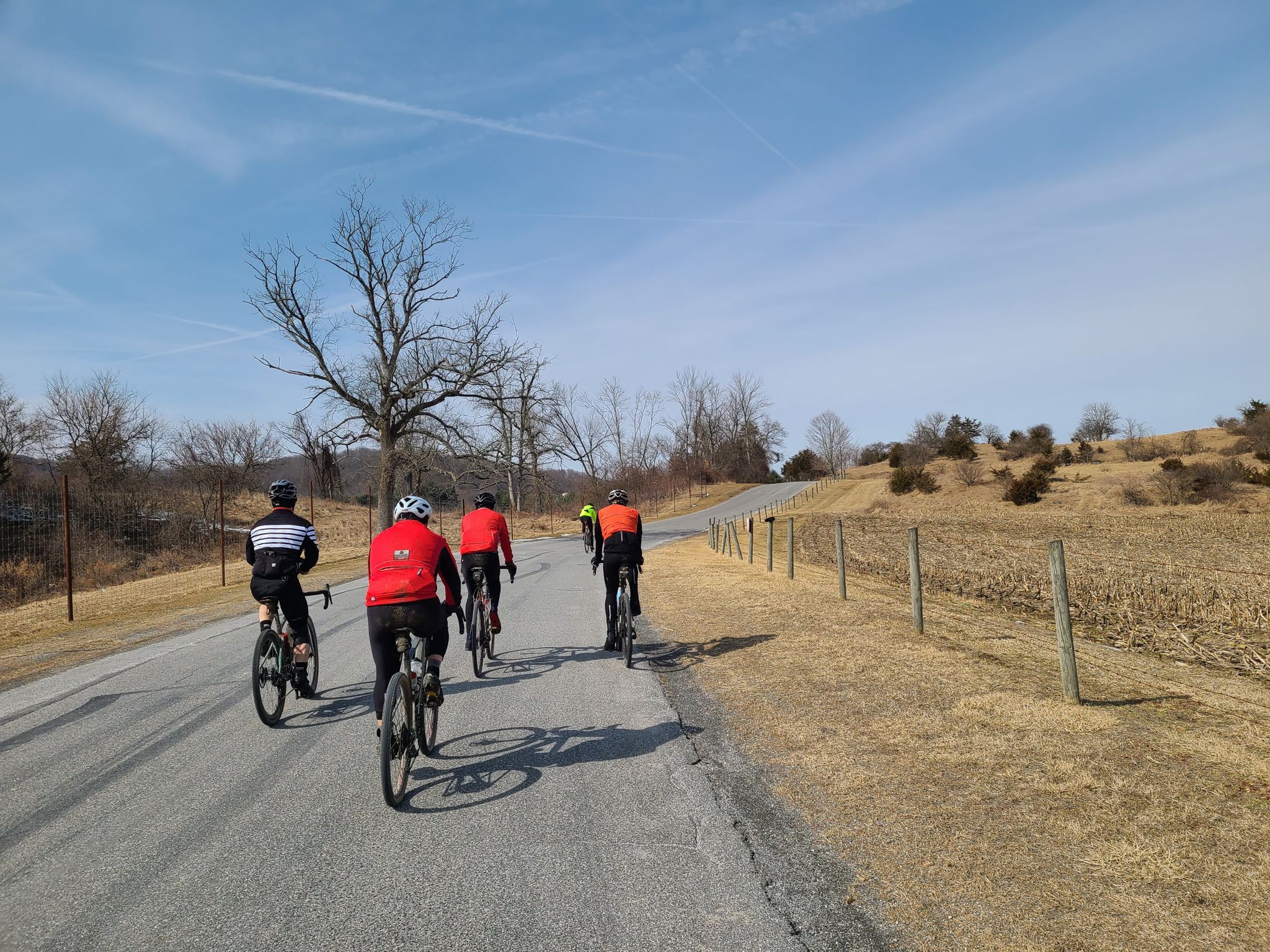 For those who missed it, here’s a quick recap of this past Saturday’s GrNY ride.

TLDR version: I promised adventure on this GrNY ride and (unintentionally) ended up seriously over-delivering. Winter has not yet receded in Dutchess County. Overall we traversed…
– snow-free frozen dirt (good for riding)
– velcro-mud (energy sapping, but otherwise fine)
– soupy mud (rideable but messy)
– ice-covered forest trails (difficult even for walking),
– crusty frozen snow (upon which we did a substantial amount of snow biking).

My bike computer recorded 79 miles and 7000′ of climbing. That was one crazy ride, but a lot of fun. Thanks everyone who joined this not-yet-spring lunacy!

=========
MORE DETAIL: Going north of the city for a gravel ride was always going to be a risk this time of year — to the extent that I chose a 100% paved route as a backup plan. But despite the frozen crust of snow in the grass around our starting location, all of our riders decided to try the dirt route.

Things started off well in the chilly morning: Nicely frozen (and therefore solid) dirt roads for us to enjoy – all completely free of snow on the road portion. That said, the snow under the trees indicated that we would surely be hiking through the forest trail portion of our ride (at West Mountain Forest). And sure enough, even walking was a challenge on that section! It was a ~0.75 mile of “ice-hiking”.
Fortunately, we soon hit roads again on the other side.

After lunch at Cousins Bakery/Cafe/Deli/Pizzeria, we ventured further north and found our dirt roads getting softer with the warmth of the day. Totally rideable, but sometimes sticky (sapping ones energy) and occasionally pretty messy. We never hit truly awful peanut butter mud, so I’ll consider that a win on the mud front. But those closed-for-the-season dirt roads were an entirely different matter! Without car traffic, they were still covered in a crust of semi-frozen snow. I expected us to be walking, but after seeing Vasyl forge ahead on two wheels, the rest of us gave it a shot. Definitely challenging, but on the flat, we managed to roll (and skid) our way forward. We did this through several short sections of seasonal road and thought we had triumphed by the time we returned to the lower loop of our ride. But around mile 64 we hit an uphill surprise of more snow-covered roads. We weren’t going to be riding up that — we barely had traction on the flats! And it was getting late in the day, so limited daylight was a concern.

About half of our bunch took the most direct paved path back towards our start location (the shoulder of a busy Route 22). The other half (including yours truly) took a detour half-way down Route 22, then veered towards the paved Mayberry trail – and towards peaceful salvation. Or so we thought! We soon hit a stretch of unexpected icy-snow stretching into the distance on the bike trail. Wow, there was just no escaping the white stuff! Fortunately, after that longish stretch of snow-biking, the rest of the Mayberry trail was fine except for short bands of snow underneath underpasses. All riders made it back to the train or their cars and were only slightly the worse for wear. It was one crazy ride! 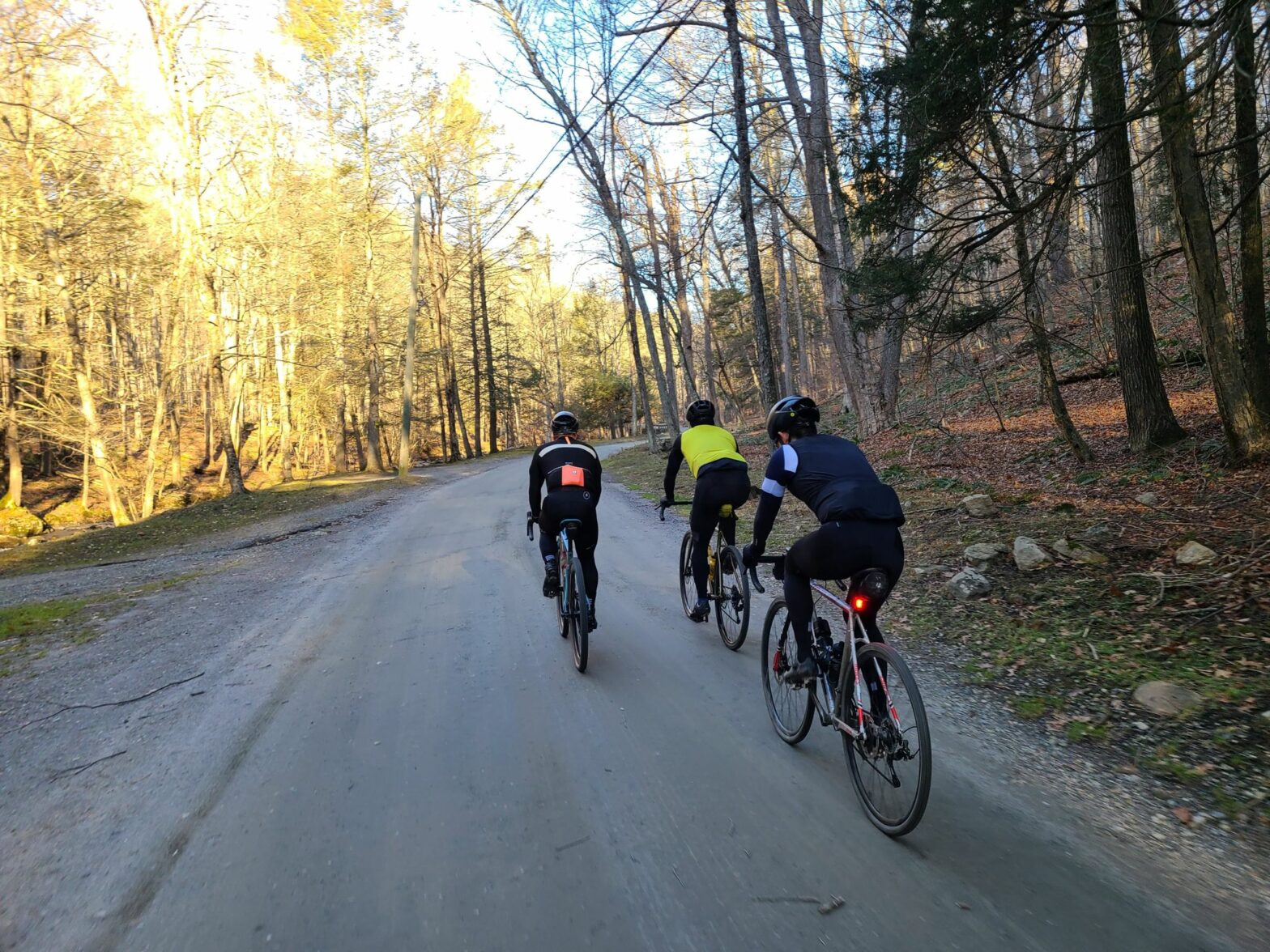 Yesterday, members of the GrNY group did this ride for the first time. I’ve had a couple of requests for the RidewithGPS route, hence this ride report. For those who don’t know, Strava events (and their routes) disappear from the group page once they are over.

From my Strava feed:
“It was an awesome day on the bike with some excellent company (most of whom woke up before 5am so we could get to the ride start before NYC traffic started!). There was much excellent dirt and plenty of climbing. Those of us who are more road/gravel oriented got several hundred extra feet of climbing by taking the paved way down Skiff Mountain. Those with better mountain bike skills chose the dare-devil, gravel descent (steep, winding, narrow, loose gravel, with potential uphill jeep/ATV traffic).
Thanks to Mark L for the spectacular route that he created in 2015 — and his advice for further improving it prior to our ride today!”

NOTES:
1) There were a couple of places with road work/closures, but on bikes, we were able to pass through.
2) Make sure you are well-stocked with food and water (e.g. in Kent) before starting the upper loop. You won’t find any places to refuel up there.
3) The route above takes the paved way down Skiff mountain (safer), but choose your own adventure (at your own risk).

* This route has no affiliation with the official Macedonia Gravel Grinder event, which will be happening for the first time this summer. I have no idea which roads that event will take, aside for obviously traveling through the lovely Macedonia Brook State Park. 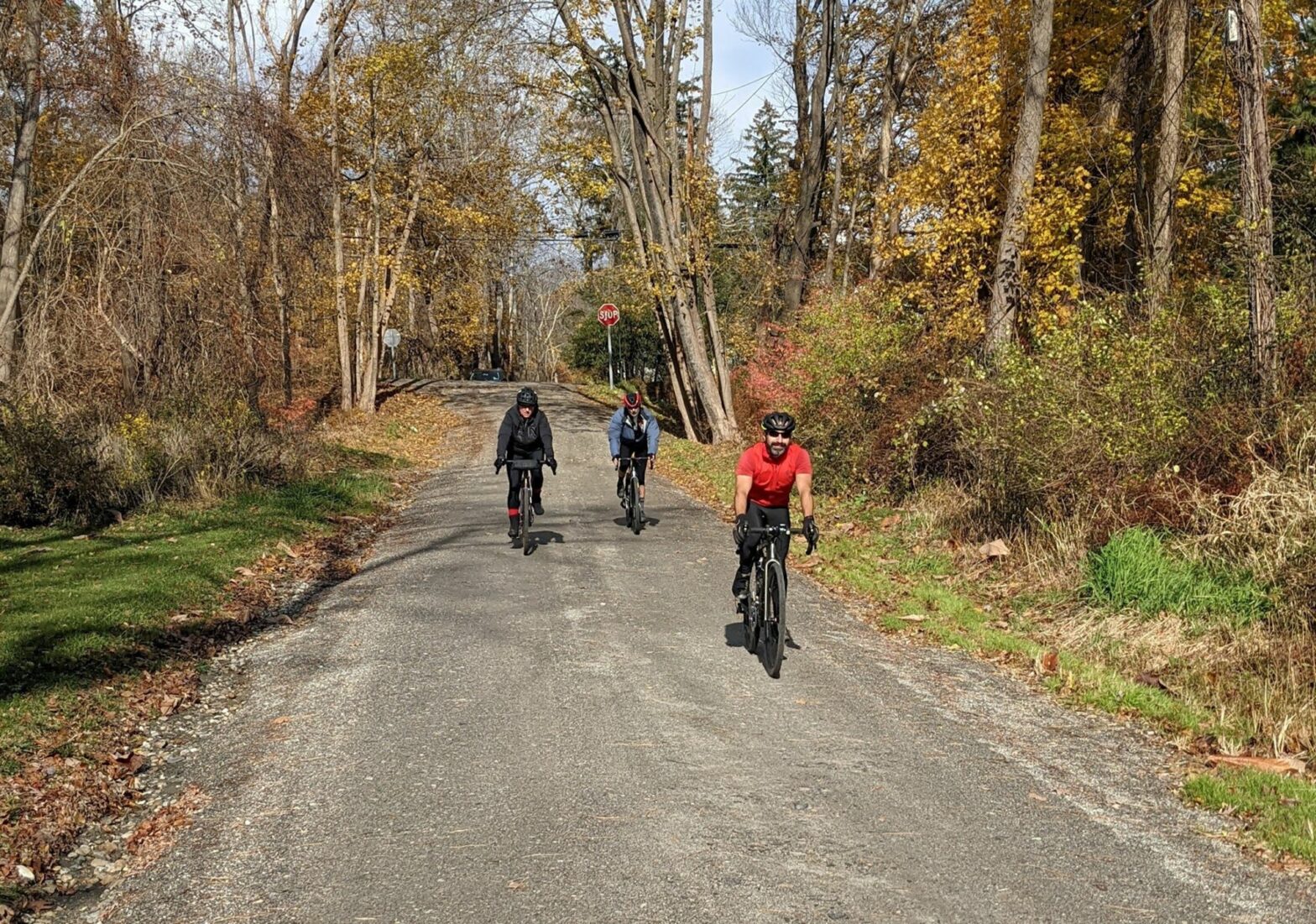 This past Saturday, we dragged ourselves out of bed early so we could ride before a predicted afternoon storm. We enjoyed some excellent dirt riding through forests and across ridges with stunning views. And we managed to complete the entire ride before some nasty weather rolled in.

Our original route would have been 77 miles (see notes for the Brewster to Wassaic ride earlier this year), but we shortened it to 47 miles in light of the weather. We also moved the start location to Wingdale, which is near the center of this “figure 8” shaped ride, so we could easily bail if the storm arrived early. Thankfully, we completed this beautiful ride before the skies opened up with pouring rain, heavy winds, and even hail in some places.

I’ve pasted our shortened route below, because sometimes folks are looking for rides that don’t require an entire day to complete. 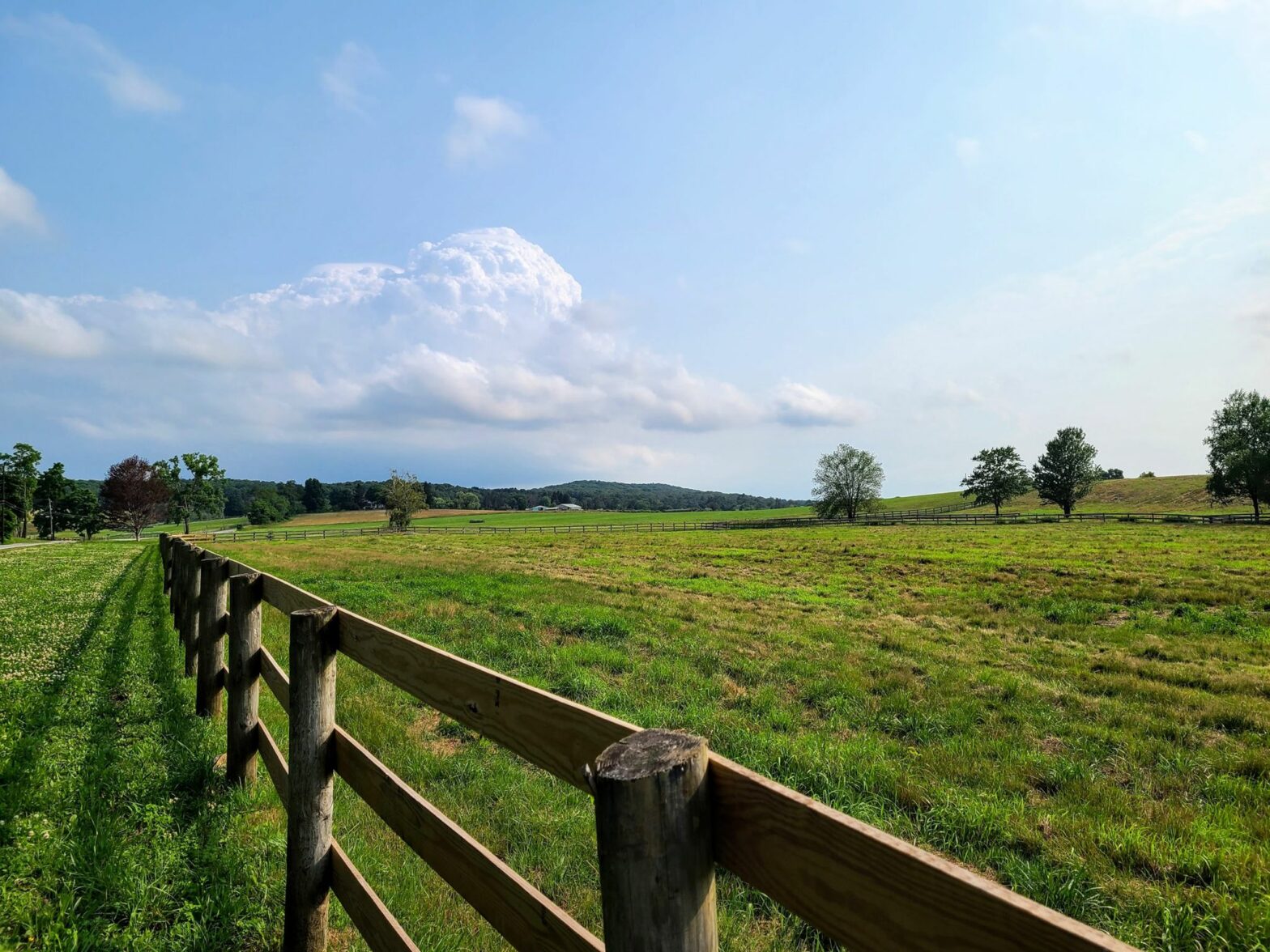 This event was on July 5, 2021: Overall, it was a challenging, but very rewarding ride to celebrate the Fourth of July weekend. The route included paved sections, gravel sections, a short section of forest trail (around mile 22), and several challenging climbs followed by memorable descents.

All riders started together in Brewster, tackled the wild Penny Lane forest trail, then continued to our lunch stop in Wingdale. We picked up an additional rider who took the same train to Brewster and was using our route as a jumping-off point for his bike trip to the Berkshires. Cousins Bakery/Pizzeria was closed for the holiday, so we had to make do with the deli/Dunkin Donuts/Mobile Station just down the road. Normally, Cousins provides some nice baked goods for bringing up the blood sugar! Around mile 28/29 our “extra” rider continued on his route, a second rider headed back towards Brewster to complete the 50 mile loop (and get home a bit earlier), while the rest of the group committed to the full 77 mile route.

RidewithGPS estimated the route at 6000’, but all of our devices registered well over 7000’ of total climbing on the day. Those climbs earned us some beautiful views and fun, roaring descents. Everybody survived the route, though some suffered a bit more than others on the climbs.

For future riders of this route: There are no stores of any kind from mile 26 to mile 69 (43 miles total), so we tried to fuel up during our pitstop in Wingdale. We used my portable water filter to top-off our water bottles around Macedonia Brook State Park, since it was a hot day. Come prepared with everything you need for that stretch of the ride!

[FYI: Strava removes all “events” from our feed once they have passed. I sometimes post “ride reports” so GrNY members can learn about past rides and hopefully try those routes themselves.]